Why Weed Makes You Laugh

When people generally think of individuals who smoke weed, a bunch of people laughing is something that may come to mind. So, why does weed make things funny? This is not yet explained in concrete terms, but here’s what we know so far: 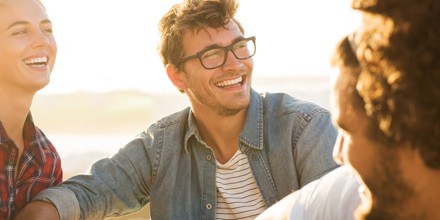 Cannabinoids: This is the science-based part of what’s going on. Cannabinoids and THC, the chemicals found in weed, are what send messages to the brain and activate various receptors which alter and change the way we think, as well as our mood. In lay-man’s terms, we normally operate in an alert, active state. When smoking weed, we transition into a much more open and relaxed state. Our defenses are lowered and we are far more likely to find even the simplest things absolutely hilarious.

Social environment: The social aspect of weed can have a big impact on why many people think weed makes things funny. This has to do with the sense of bonding and experience that comes about in group because of weed. In a group setting where everyone has their defenses lowered, it’s much easier to let loose and to laugh about things, whether they are legitimately funny or not. As it’s accepted by the group, this encourages the laughing behavior associated with weed.

External stimulation: When someone is smoking weed, things that are normally funny are greatly enhanced. Therefore, if someone is watching a funny video on YouTube and they are on weed, they will have a much stronger reaction to what they’re watching than someone who isn’t. This type of external stimulation can also be a way to explain why weed makes things funny.

Whether cannabis every truly becomes legal or not, there are some things that we know. From the information that we have so far, those who smoke weed can certainly experience a heightened sense of humor, as well as a singular form of concentration. The effects of THC may differ a bit from person to person, but overall, we can say with certainty that weed will always make things funny.