Let us introduce you to the Bong of the Day - Mr Potato Head Bong.

Mr Potato is an American toy, plastic version of the potato, that can be decorated with different plastic pieces like eyes, ears, mouth, glasses, hands and many others. The toy was invented by George Lerner in 1949 and is very popular until this days.

Pretty easy to make, because the toy itself already has a lot of holes. You will need to get a dremel or a drill with thicker bit. Place a smoking pipe (preferably metal one) in a mouth hole on Mr Potato's Body. It won't fit right away. so you will need to use dremel or a drill to make it bigger. Place a mouthpiece into the top hole of Mr Potato's head (once again, you might need to use a drill). Also make sure to leave one hole open, it will be your carb hole.

Now finish up The Mr Potato Head Bong with the rest of the plastic pieces, create Unique Mr Potato that will match your taste. 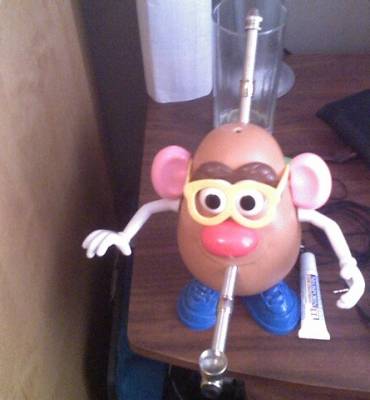