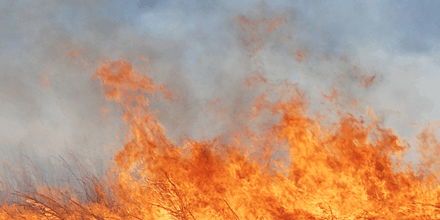 Still seeing marijuana as an illegal substance, Indonesian authorities routinely destroy piles of pot by burning them. Those Indonesians who are convicted of crimes involving drugs are invariably detained and may even face the death penalty. These include the 13 individuals that Indonesia's National Narcotics Agency has arrested since January on charges of drug smuggling.

Keeping up with their traditions, Indonesian authorities recently burned tons of weed in West Jakarta, Indonesia. The cannabis had previously been confiscated by the authorities after they raided multiple places for manufacturing and smuggling cannabis, including an airport where customs officers found large quantities of more serious drugs like crystal meth and ecstasy.

Citing concerns about fire hazard, and about getting the pilots high, the authorities did not burn the weed at the airport. Instead, they set it alight on an empty field in West Jakarta, with the smoke getting so thick and spreading so far across town that some mask-wearing police officers felt dizzy, had migraines, or ended up with red eyes. The reporters who were covering the event and who were not wearing masks were not spared from the fumes, with one of them saying that he had a headache because he “wasn’t wearing a mask,” and another who had to sit down and have a cup of tea.

All of West Jakarta’s citizens actually got a free high thanks to this public pot burning. Of course, none of Jakarta’s citizens had an issue with getting a little high; the only complaint that the Jakarta police reported was that of some citizens who did not agree with wasting so much weed.

Indonesia's National Narcotics Agency’s said that the marijuana fumes will not cause any long term public health problems.